Buskett Gardens, forming one of the few woodland areas in Malta, are located in the fertile valley of Wied Il-Luq in Siggiewi. The 30 hectare site lies to the west of Siggiewi (Citta Ferdinand) and just east of Dingli. The Verdala Palace, an official residence of the President of Malta, stands on the edge of the Gardens.

Indigenous forests once covered Malta, but trees were cut down for shipbuilding in the era when galleons plied the Mediterranean waters and for agricultural purposes. The gardens were planted by the Knights Hospitaller as a hunting reserve. Recently, the gardens have been identified as an Important Bird Area because they support large numbers of birds, especially during the seasonal migration through the Maltese Archipelago.

Many different trees and shrubs grow in the gardens, including numerous fruit-bearing trees. One of the greenest areas in Malta, the gardens are at their best in the spring but also provide shade from the harsh mid-summer sun and offer a quiet place for a walk in the winter months. The gardens are very popular with the Maltese people, who often go for walks in the peaceful settings or enjoy a picnic in the shade of the trees. The gardens serve as a venue for the Feast of Imnarja which is celebrated on 29 June. Hundreds of people flock there the previous evening, to eat the traditional Maltese dish of rabbit stew cooked in wine, to listen to traditional folk music and singing, and to enjoy the annual agricultural show in the morning.

The Verdala Palace is perched on a hilltop adjoining and overlooking Buskett Gardens. It was built by Grand Master Verdalle in 1588 as a summer residence. The area was ideal ground for the wild game introduced by the Order. The underlying valley provided a steady source of water. Architect Gerolamo Cassar planned a fortified structure to provide defence against the Turks who struck Malta from time to time. The most prominent among the numerous features incorporated in its design was the dry ditch surrounding the Palace. Verdala Palace was used as a military prison in 1800 for Napoleon’s soldiers who had surrendered to the Anglo-Maltese forces. For some time the building also served as a silk factory after which it was abandoned and fell into disrepair. It was in Governor Sir William Reid’s (1851-1858) time that the Palace was restored to its former glory.

Verdala Palace then became the Governor’s country residence and further improvements were made by subsequent governors. In 1939, at the beginning of hostilities which led to the Second World War, Verdala Palace was used as a repository for the National Musuem of Arts. In 1982 Verdala Palace started to accommodate visiting Heads of State. The Palace hosted many distinguished dignitaries including King George V and Queen Mary in 1912, Prince Albert in 1913 and later King George VI in April 1943, King Edward VII and Queen Alexandra, Empress Marie Feodorovna of Russia in 1909 and 1919, Kaiser Wilhelm II in 1904, Colonel Muammar Al Gaddafi, Leader of the First September Revolution of the Libyan Arab Jamahriya, Josip Broz Tito, Former President of Yugoslavia, Nicolae Andruta Ceausescu, Former President of Romania and Giovanni Leone, Former President of Italy.

Verdala Palace is now the official summer residence of the President of Malta. In the recent past, fund raising activities, including the annual August Moon Ball and concerts in aid of the Malta Community Chest Fund, were held at the Palace.

Adapted from Wikipedia and the Verdala Palace page on the President of Malta website. 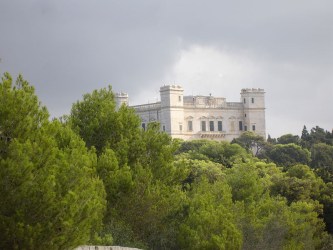 The Main Hall in Verdala Palace