St Paul’s Catacombs are a typical complex of interconnected, underground Roman cemeteries that were in use up to the 4th century AD. They are located on the outskirts of the old Roman capital Melite (today’s Mdina), since Roman law prohibited burials within the city. St Paul’s Catacombs represent the earliest and largest archaeological evidence of Christianity in Malta.

The Catacombs of St Paul are situated in Rabat. The site consists of two large areas called St Paul’s and Saints Paul/Agatha, and are littered with more than 30 hypogea, of which the main complex, situated within the St Paul’s cluster, comprises a complex system of interconnected passages and tombs covering an area of well over 2000 sqr metres.

The cluster gets its name from the myth that it was once connected with St Paul’s Grotto, which was once also partly re-cut into a Palaeochristian hypogeum. The origin of the main catacomb most probably started from a cluster of small tombs of the Punico-Roman type and hypogea which were eventually enlarged and joined haphazardly to create the complex system of passages and tombs used in the late Roman period. Although much smaller when compared to the catacombs of Rome and other large Roman centres, the catacombs of St Paul are a good example of the Maltese underground architecture, which is the result of an indigenous development which was barely influenced by overseas traditions.

The entrance to the main complex of St Paul’s Catacombs leads to two considerably large halls, adorned with pillars made to resemble Doric columns and painted plasters most of which have now disappeared. On keeping with what seems to have been a norm in most Christian catacombs, these main halls are equipped with two circular tables set in a low platform with sloping sides which resemble the reclining couch (triclinium) present in Roman houses. In all cases found in the main complex and the numerous other Christian Hypogea of the site, both table and couch are hewn out in one piece form the living rock forming a single architectural unit within an apsed recess. Although various interpretations may be found, these triclinia, or Agape tables, were probably used to host commemorative meals during the annual festival of the dead, during which the rites of burials were renewed.

Adapted from the St Paul’s Catacombs page on the Heritage Malta site. 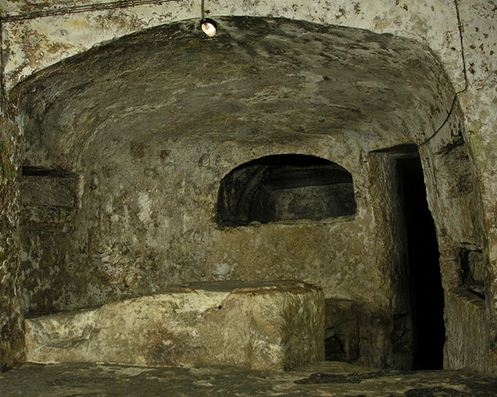 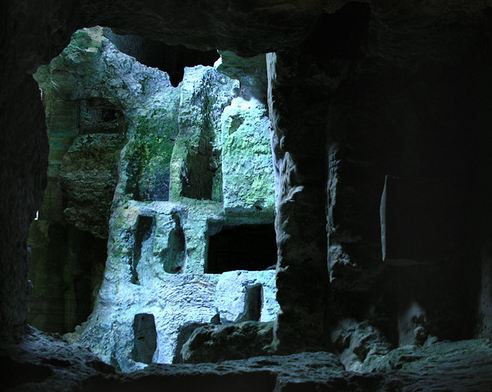